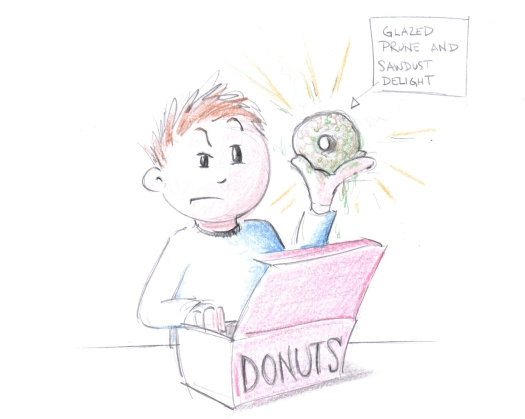 My dad always looked for ways to make himself useless around the house. If he was asked to vacuum a room, the telltale rotating brush tracks would be missing from half of it. If he was asked to do dishes, he’d end up with a dishpan swirling with shards of glass. If he was asked to paint a room, he would buy the paint one quart at a time, thereby necessitating four trips to the hardware store to complete the job.

Dad might have been genuinely incompetent, but I believe his actions were all part of a passive-aggressive master plan. He knew that if he made a mess of things, Mom would yell, but she also would never — ever — ask him to do the job again. Mom had a very low threshold for incompetence. On more than a few occasions Dad was on the receiving end of Mom’s infamous bon mot: “You can’t be that stupid.”

To Dad, such harsh words were a small price to pay for a life of leisure.

Since Mom couldn’t count on Dad to do anything of value inside the house, she sent him out to the yard. This worked for a while. Yard work, unlike dishes, is more inherently “manly” and Dad took to it well, often taking off his shirt while digging up stumps. Our fossilized old lady neighbors peeked between the slats of their picture window blinds and swooned.

But yard work was still work and Dad soon searched for ways to get out of it. When I reached the tender age of eight, Dad seized what I imagine was a long awaited opportunity.

“Hey, boy! Guess what? You’re going to make some money cutting the lawn!”

To stupid little me seven dollars was a fortune.

So every Saturday I got stuck mowing and bagging an acre-and-a-half worth of grass while our old lady neighbors found something else to look at.

Dad had a gift for avoiding work, but his role as a Passive-Aggressive Immovable Object was no match for Mom’s Aggressive-Aggressive Unstoppable Force. If Dad was useless on our property, fine. She would send him off of it.

Mom’s purchasing requests were never unusual; she always told Dad to get food staples: milk, bread, eggs, butter. What was unusual was the time of day Mom needed them. Without fail, she sent Dad to the store late in the evening. On more than a few occasions she sent him out after midnight. I don’t know why. Or maybe I do.

Dad tried to screw things up, of course, but he was working at a disadvantage. If Dad tried to come home with the wrong item, Mom would send him back out into the night until he got it right. Mom was a night owl. Dad wasn’t. The longer he farted around, the more determined and invincible she became.

Dad soon recognized that this new job was his forever. So he stopped screwing up. Mostly. His one act of rebellion was to always purchase a leaky carton of milk.

“They were all leaky,” he’d say by way of explanation.

To her credit, Mom was generous in victory. She accepted the leaky carton without comment and placed it on a specially designated saucer in our fridge known colloquially as The Drippings Dish.

Mom’s plan to make Dad useful around the house was an unqualified success.

One evening, after my older sister, Gina, and I went to bed, Mom instructed Dad to go to Dunkin’ Donuts to select a dozen donuts for the family. I don’t know why she asked him to do such a thing. Maybe she had grown complacent in her victory. Maybe she just wanted to get rid of him for a while. Whatever the reason, she sent Dad — a man who took a sort of perverse pride in messing things up — on an extremely important mission. One that required an inordinate amount of independent thought.

True to form, he screwed it up spectacularly.

Dunkin’ Donuts has a wide selection of donuts. Some (glazed, jelly) are tasty but ordinary. Others (vanilla and chocolate kreme) can place the donut eater in a blissful, euphoric state of nirvana.

Then there are the donuts designed, I assume, to serve as a kind of social experiment, one that asks the question: “Just how badly do you want a donut?”

I found the Dunkin’ Donuts box early the next morning. I made many new discoveries that day. Did you know that Dunkin’ Donuts once made prune Danishes? Neither did I. But they did. Dad bought three of them.

He bought two plain donuts. Plain! I thought the plain ones were for display purposes only.

He also bought donuts with chunks of apple inside. No one on earth reaches for a donut when they want to taste a chunk of apple. No. One. Ever.

There were other abominations in the box, but I don’t remember them anymore, I chose to bury them in my subconscious.

His selections were bad enough to seem almost spiteful. It was as if Dad walked up to the counter and exclaimed, “Gimme a box of crap!”

There was a method to Dad’s madness, however, for he has an iron stomach. Dad could endure – even enjoy – just about any donut that ever was. Not only did Dad like all the donuts he picked out, but also he didn’t have to worry about anyone else eating them up. All twelve were his and his alone.

Mom, God bless her, immediately recognized the need to reassert her authority.

That afternoon I heard her familiar call up the stairs: “MICHAEL! GINA! COME HERE!”

My sister and I thumped down into the kitchen to find Dad seated at the dinner table looking almost contrite. Mom stood over him with her arms folded.

She nodded to me. “Get that pad of paper and sit down.” I did as I was told and joined my sister at the table opposite Dad.

“You two are going to tell your father what kind of donuts you want,” she said. “And then he is going to go get them. All. By. Himself. Because he is an adult.”

She let that statement hang in the air for a while.

“Good. Now I’m going to go work, because my workday does not end once I get home. It just begins.” She snapped up a rag and a can of Pledge and was gone.

For the next 15 minutes, Gina and I wrote up a list and gave Dad a crash course in the art of donut purchasing.

Dad listened. For the first time ever, I think, he seemed to make a real effort to get a household chore right. This trip was for his kids. His kids deserved good donuts.

Armed with his list and a new attitude, Dad returned to Dunkin’ Donuts. The selection he came home with was wonderful.

Gina and I couldn’t help but notice that one of the donuts was the crappy apple chunk kind that we specifically told Dad not to get. We decided, however, not to dwell on his small transgression.

Every year I convince myself that I like winter a little more than I actually do.

Don’t get me wrong; I like winter a lot. It’s the season I don’t sweat. Oh, how I hate to sweat. And I’m pretty sure I sweat more than most people.

Winter is also the season I don’t cut the lawn. Oh, how I hate to cut the lawn, for it is the sweatiest chore ever invented by anyone ever. And sweating while mowing is beyond awful. By the time I finish cutting and bagging my grass on a hot summer day, a shag carpet’s worth of clippings are spot-welded to every inch of my sweaty, sweaty self. The only thing worse that being sweaty is being sweaty and filthy.

On mowing days that are particularly sweaty and filthy, I attempt to convince Ellen that we should replace our lawn with a yard full with gravel. “Like they do at beach houses!” I say with all the false enthusiasm I can muster. “We can pretend we live near the ocean! Wouldn’t that be fun?”

“No,” she replies. “Now go shower. You’re sweaty and filthy.”

The arrival of winter also means I no longer need to be on-call for spider-killing duty. During the warmer months this is pretty much my full time job.

I find that spiders prefer to reveal themselves three seconds after I sit down to read. It’s quite remarkable, really. In tandem with the cracking of a book spine I hear an anguished “MICHAEL!” or “DAAAAAD!” from a far off corner of the house.

“COMING!” I shout back, for I am nothing if not a dutiful husband and father. “Just let me finish this paragraph!”

So much for the paragraph. I grab a Squishing Tissue and the Assassination Stepstool (the offending spider is almost always on the ceiling) and get to work.

In the days before I was married, my relationship with spiders was not nearly as antagonistic. I lived by one simple rule: If I needed a stepstool to kill them, they wouldn’t get killed. It was a fair arrangement; I stayed on the floor, spiders stayed on the ceiling, and we both had the exact same amount of square footage on which to live. It was a kind of utopia, really.

Ellen’s spider philosophy is different: The Only Good Spider Is A Dead Spider. Ellen is my partner and soulmate, so I kill. Please don’t judge me. I’m just following orders.

Winter doesn’t just keep me away from much-hated chores; the season also has a lot to offer. I like snow. A lot. I even like to shovel it; the act of shoveling places me in a serene meditative state that gets my creative juices flowing. Many of my best story ideas germinate as I clear my driveway.

I’m more alert in cold weather. I laugh easier. My bed is comfier. Long showers are more  satisfying. You can make an entire dinner out of nothing but soup and bread. And, thanks to my mother-in-law, the house is stocked with enough gingerbread to last until April.

Unfortunately, there is a big downside to winter that I try my best to forget:

No one wants to come near me.

I deliver pain as often as I receive it. Last week I touched my son on the shoulder and he collapsed to the floor as if he was Luke Skywalker getting worked over by Emperor Palpatine.

My son has a flair for the dramatic, yes. But he has since made a concerted effort to stay out of my reach.

Ellen can also count herself as a victim. This morning as she got ready to leave for work I leaned in for a kiss. My electrified lips sent us both lurching backwards in pain.

“DAMMIT!” she exclaimed. Not exactly a sweet nothing, but justified under the circumstances.

“I love you, too,” she grumbled as she headed out the door.

Then she gave me a peculiar sideways glance. Maybe I read her expression wrong, but I think she has decided to treat me like a leper until March.

It is a depressing thought. To soothe my emotional pain, I will drown my sorrows in gingerbread. As I do so, I will contemplate the unthinkable: maybe lawn cutting and spider killing isn’t as bad as I once thought.