We are gathered here today to remember my pet cleaner shrimp, Fosse.

END_OF_DOCUMENT_TOKEN_TO_BE_REPLACED 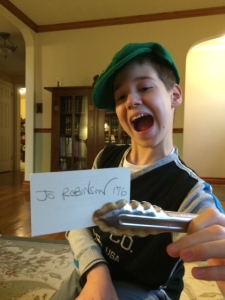 Last week, the lovely and talented Jo Robinson was the winner of The Official Semi-Annual Mike Allegra Win a Doodle Contest. Her prize was a custom made doodle of anything she wanted!

What she wanted was a flock of birds:

“Can you do a doodle of my birds, please? I have four of them — two nanday conures (a male called Beep Beep and a female called Beany), and two masked weaver bird boys called Jelly and Button. I call them my feathered horde… They fell out of their nests up in Zimbabwe (lived there for 18 years until we had to leave a couple of years ago) and have been my babies ever since.”

Well, Jo, your wish is my command:

But that’s not all! Jo also won a Mike Allegra-penned story featuring five words of her choice. Those words are:

So far I’m stumped, but I’m sure I’ll come up with a story by next week. Stay tuned.

She is a six line wrasse. I named her Audrey because she has the grace and elegance of Audrey Hepburn.

And because Audrey – like all living things – needs to poop on occasion, I also got a shrimp to, ahem, clean up after her. The shrimp is named Fosse – as in Bob Fosse. I named the shrimp Fosse because his waggling antennae reminded me of jazz hands. I also chose the name because, if memory serves, Bob Fosse (the person) drank Tab. If you don’t remember Tab, it was a diet soda that tasted like poo. So there we are.

And no tank is complete without a snail. He has yet to exhibit enough personality to warrant a name. I am, of course, willing to hear suggestions.

To be honest, Audrey, Fosse, and No Name Snail don’t belong to me. They are my son’s pets. He just let me name them.

Alex was always fascinated with saltwater fish. Ever since he was about three, he would leave me in the dust the moment we entered a pet store. Off he’d race to the tanks along the far wall.

He must have picked up this behavior from my wife, Ellen, who also has a habit of abandoning me in pet stores. She, however, would dart in the opposite direction, to the furry critter section, and act as if it was her personal petting zoo.

I would’ve preferred to have followed my wife to the critters; I am a rodent person, after all. But you can’t let a preschooler wander off to a distant corner of a huge, busy store alone, because, you know, blah, blah, blah, bad parenting, blah, blah.

I also couldn’t ask Ellen to watch Alex because she would always have her hands full. Literally. She would be cradling three chinchillas in her arms saying, “Who’s adorable? Who’s adorable? You are! Yes, you are!”

So off to the fish tanks I would go. Alex would talk to me endlessly about how beautiful the fish were. How graceful they were. How awesome the tanks looked. How much he liked the pump that blurbled air bubbles into the water.

Then he’d ask me which fish was my favorite. In response I’d point to the 89-cent goldfish, because I had a pretty good idea where this conversation was going.

But he never asked for a fish. Perhaps in his young mind he thought they were for display purposes only.

So Alex and I just talked and watched the fish as we waited for the PetSmart employees to shoo Little Miss Grabby Hands away from the rodent cages. When Ellen no longer had anything in her arms to pet, we were allowed to leave.

As Alex got older he and I still lingered in the fish section of the pet store, but our discussions shifted to questions about fish care. And when his questions got too complicated for me to answer, we’d chat up an employee. Alex knew my philosophy of pet ownership: If you’re not willing to take care of it, don’t bother to ask the question. This philosophy had held him off for years. By the time last Christmas rolled around, however, he was weighing his options. Maybe he did want to take care of a fish.

And maybe I did, too. After all those times of standing in front of those tanks, I began to awaken to their appeal. No, fish aren’t as cuddly as rodents, but they sure are beautiful, aren’t they?

And did you know that you have to pay for salt water? You can’t just throw sea salt in tap water and call it a day, apparently. And you need living sand. Not just any old sand. The living kind. That also goes for rocks, too. You need living rocks. (The  idea that the rocks and sand are alive unnerves me slightly.) You also need a heater and a thermometer and a thing that scrapes the slime off of the glass. And those poo-eating shrimp aren’t chump change either. And please don’t get me started on how much that bitty eight-gallon aquarium cost.

When I was a kid, I had a goldfish. I won him at a fair. It lived in a glass bowl with colored (non-living) rocks and a plastic castle. It was dead in two months. I wasn’t exactly sad to see it go. Neither was my mom. The investment was minimal. The bowl, rocks and castle probably cost three bucks.

But I will do everything in my power to keep Audrey alive and happy. I’ve spent way too much for her not to be happy. And alive.

Besides, ever since she came to live with us, not a day has gone by when Alex and I haven’t pulled up two chairs to watch Audrey glide around the living rocks, Fosse whip out the jazz hands, and No Name Snail do nothing. We watch and we talk. And those moments are well worth any investment.