Welcome to my new interview show, Waffles with Writers! Every month I will chat with a working writer over a nice, waffle-centric meal.

Today’s brunch guest is Madame Weebles, who is best known for having recently taken the blogging world by storm with her sometimes profound, sometimes profane, and always compulsively readable posts. Decades before she named herself after a 1970s choking hazard, however, Weebles’ writing credentials were firmly in place; her career includes long tenures as both a professional historian and medical editor. These days, in addition to her regular posts, Weebles works as a reiki master and geeks out over the life stories of Hot Dead Guys.

Mike: Welcome, Madame! You’re just in time. The Belgian waffles are just out of the iron and piping hot. What toppings would you prefer?

Madame: Ice cream and chocolate syrup, please. And maybe some strawberries. And bananas. And whipped cream.

Fortunately I have a well-stocked topping supply. Bananas… Ice cr­— Listen, while I’m getting all this stuff, let’s get things started. I hear that you used to work as a military historian. In terms of traditional story structure, which battle in U.S. history is the most dramatically satisfying?

This is an excellent question, and one that I never really thought about. They all have elements of drama, but one of my favorite stories is from the American Revolution, in August 1776. Washington and the Continental Army were getting their butts kicked by the British in the Battle of Brooklyn Heights (it didn’t help that a lot of Loyalists lived in New York and helped the British). They were cornered on the Brooklyn coast with General William Howe and thousands of Redcoats bearing down on them. Instead of surrendering or trying a last-ditch effort to fight, Washington engineered the escape of the entire Continental Army across the East River, at night. In the morning, Howe reached the American camp and found nothing. That’s a pretty neat trick, rowing your whole army away in complete silence, under cover of darkness. The battles weren’t Washington’s finest hour, but the evacuation was pretty darned clever. If he hadn’t done that, his army wouldn’t have lasted to fight another day, and the war would have been largely over.

On your blog you have a peculiar obsession with Hot Dead Guys. In fact, you are writing a story about one such Hot Dead Guy, Robert Cornelius. Can you give me an elevator pitch explaining why Cornelius’ story is worth hearing?

He was smoking hot, for starters. Possibly the hottest dead guy in history. That’s reason enough. But if you need more – although I have no idea why you would – he was a pioneer in pretty much everything he touched. In 1839, he was the first to take a daguerreotype photo of a human being – a huge feat at the time. He had 22 patents – several of which were cutting-edge technology. In 1843 he created a high-quality fuel lamp that burned cheap lard; this was a big deal because people who couldn’t afford lamp fuels like oil, could now have good lighting in their homes. He became a household name for that invention. Also, if you have a gas stove, you know that electric spark that ignites the gas burner? He was using that technology back in 1866. He knew his stuff. And finally, he was SMOKING HOT.

Smoking hot. Yes. What is your plan for Cornelius’ story?

There are a few journals/organizations that have expressed an interest in it, which is nice. But it won’t be long enough for a book, so it will be an article. If I’m ever feeling really ambitious I might write a book with each chapter being another bio of someone who has been lost to history but shouldn’t be.

Another excellent question. I could say something like Hitler or Stalin, but that’s too easy. Instead, I’m going to go with really obnoxious people who would be so annoying that my enemy would pray for death. So I would invite several former co-workers, as well as Justin Bieber, the cast of Jersey Shore and The Kardashians, and Tom Cruise.

I forgot about him. Trying to block him out of my head. But yes, I would invite him too.

Is there a story you’d really like to write about but fear you never will?

There is, actually. It’s about Nikola Tesla, when he demonstrated his alternating-current induction motor in 1888. I would love to tell the story of Tesla demonstrating that motor and describing the reaction from the crowd. I mean, this was HUGE. At the time, a few other guys were working on similar projects, but Tesla beat everyone to the punch. I would love to tell the story about the impact of that presentation and the audience response. Was it quiet enough to hear a pin drop? Was there applause? Was there a loud murmur as people talked among themselves about it? Were people saying “WTF?” (or the 19th-century equivalent of WTF)? Did people realize then that they were looking at something that would literally change the world? I don’t know if there are enough first-hand accounts of this event, or even news reports about it, but I want to tell that story.

Is the absence of documentation the reason why you haven’t written the Tesla story?

That’s the only reason. If another dig through the records yields any helpful accounts, I will absolutely write it.

You now work as a reiki master, which I find fascinating. Do you find that your skills in that field help you with your writing? Does it help you to fight what you once described as the “Judgmental Brain of Madame Weebles?”

It hasn’t helped with the writing so much, but it does help ground me when the judgmental brain starts spouting off. It helps to remind me that my brain isn’t that smart sometimes.

Thank you so much for visiting Madame! It’s been delightful. Would you like some waffles for the road?

Yes please! These are delicious! I’ll probably finish them before I even get in the car!

As regular readers of this blog know, I am not a fan of cats.

I am horribly allergic.

I am also a protector of the cute, fuzzy, little animals that cats enjoy killing. Like this angel:

So cats are not welcome anywhere near the Allegra house.

Many of you devoted cat owners out there have chosen to look past my anti-feline stance. You are wonderful, forgiving people who accept me for who I am. I thank you.

But one of you, using a form of extortion that would make Tony Soprano flinch, forced me draw a picture of one.

Just kidding. Jilanne Hoffmann is actually a wonderful person. A few months ago, she and I made a deal. Jilanne would use her son to promote my organization, Humans Against Celebrity Kid Stories (H.A.C.K.S.), and I, in turn, would draw a commemorative postage stamp on the subject of his choice.

I used to draw these stamps all the time for my own son. Here’s a small sampling from Alex’s collection: 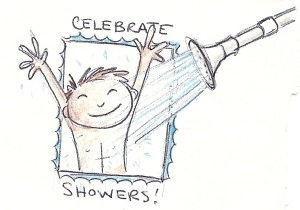 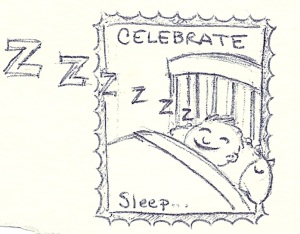 I also made Alex a couple of gross ones. 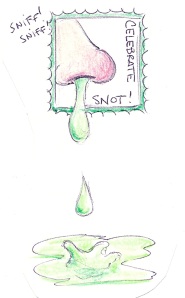 Jilanne held up her end of the bargain, so I owed her son a stamp. Since her boy is nine, I assumed I would be drawing a sequel to Snot or Toots. So you can imagine my surprise when he asked for “Celebrate Cats.”

I tried to convince him otherwise. I truly did. Rats are cuter, I told him. Much cuter. But he was unpersuaded.

So here’s your cat, kid. You’ll get the original drawing in the mail in a few days. And don’t ask me for anything else until you learn how to properly appreciate rodents. I have a Celebrate Guinea Pigs stamp in me just aching to get out.

What’s that? You wanna be cool like Jilanne and join the H.A.C.K.S. team? Click HERE to learn about the organization and click HERE to become a member!

A recent post by the lovely Jilanne Hoffmann reminded me that I am supposed to be heading up an Important Social Movement.

And now Humans Against Celebrity Kid Stories (H.A.C.K.S.) is open for business!

Read all about it!

Only together can we put an end to awful stories — like that Christmas one by Harry Connick Jr! (I expected better from you, Harry.)