One time while babysitting my sister’s three kids, I got talked into watching The Lion King 1½. I’m not sure how those little buggers pulled this negotiation off, but they did and I wasn’t happy about it.

“Hooray,” I thought as they led me to the couch. “A cheap-Disney-direct-to-DVD-sequel-cash-in. I just bet it will be super-awesome. What fun we shall have!”

But I stifled my kneejerk grumpiness and settled in. I reminded myself that the movie is for children, not for me. It was time to be a Good Uncle. So I sat and carefully watched the film, knowing all too well that the kids would quiz me later.

And I was right. They did quiz me – just not in the way I expected.

In one early scene, Timon the meerkat (voiced by Nathan Lane) tells his dad (voiced by Jerry Stiller) that he is leaving the meerkat colony. In response, Jerry Stiller – in that wonderful Jerry Stiller-like way – got emotional. He ranted, he raved, he howled to the heavens. In a flash, my mind leapt to all of Stiller’s great scenes as George’s dad on Seinfeld. 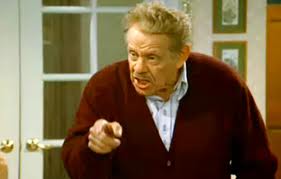 Anyway, Stiller the meerkat did his yelling thing for quite a while. Timon listened. Then, when the dad finally stopped yelling and trailed off, Timon, heaving a heavy sigh, muttered, “Way to play to the cheap seats.”

I haven’t done it justice, but believe me, it was a great line. The timing was perfect. Lane’s delivery was perfect. The heavy-lidded look of disgust on Timon’s face was perfect. (Also, I was primed for a good joke as I was still reminiscing about Stiller’s antics on Seinfeld.)

In short, the quip caught me flatfooted. It killed me. I wheezed. I snorted. My “ha-ha ha-ing” rat-a-tat-tatted like a tommy gun. My laughter was even accompanied by the occasional, “Woo!”

I was quite a sight.

After I finally composed myself, I looked up to see all three of my charges staring at me with furrowed eyebrows.

“What is so funny?” Lauren, the middle child, asked. She was irritated by my amusement.

It was then that I realized that The Walt Disney Corporation had thrown an old guy a bone. It was almost as if, in that little, funny moment, the filmmakers spoke to me personally. “Listen,” they told me. “We know this movie isn’t nearly as good as The Lion King. We know you know that we’re phoning it in because this movie is direct-to-DVD and geared to babysit your kids. We also know that very few kids can tell a good cartoon from a bad one. Remember when you were a kid and Hong Kong Phooey was your favorite cartoon show? Have you seen a Hong Kong Phooey lately? See what we mean?”

Then the filmmakers got to the heart of the matter: “That being said, we also understand that sometimes you’ll be forced to sit here against your will and watch this stuff. We do feel your pain. So here’s a joke just for you. Enjoy!”

I did, and I was grateful.

At the kids’ urging, I paused the video to explain the joke. I explained how the cheap seats for a play are far from the stage. I explained how an actor needed to unnaturally emote to get his point across to those folks way back there.

On it went. My remarks led to more questions, which I answered as best I could.

It turned out to be a very lovely chat.

Now I was doubly grateful: first, for the good joke, and second, for the thoughtful conversation the good joke spawned. I had also learned a lesson; I will never again so quickly pooh-pooh another cheap-Disney-direct-to-DVD-sequel-cash-in.

Hold on. Disney made a movie called Cinderella II?

Oh, I am going to murder someone.

Now let me open up the comments section by posing this question: What is your favorite “grownup” reference in a children’s movie?

Hi, my name is Mike Allegra. I like writing and people pay me to do it, which is wonderful. I also like waffles, but no one pays me to eat them, which is probably just as well. View all posts by heylookawriterfellow

46 thoughts on “The Line King”