Hello and welcome to the latest installment of my sort-of-monthy bloggy interview show, Waffles with Writers, where I chat with a working writer over a carbo-loaded breakfast. Today’s guest is the lovely and talented author Betsy Kerekes. She the author of Be a Happier Parent or Laugh Trying and coauthor of 101 Tips for Marrying the Right Person and 101 Tips for a Happier Marriage. She writes newsletters and edits for a non-profit, supervises her three homeschooled children while keeping an eye on the toddler, and blogs at parentingisfunny.wordpress.com. She can also be found on twitter @BetsyK1.

Hi, Betsy! Come on in. Pull up a chair. How do you like your waffles?

Thanks, Mike! I’m so honored to be here. As to my waffles, normally I just have syrup, but since this is a special occasion, I say go all out: gimme some whipped cream, blueberries and strawberries. I feel like living large today.

Then live large you shall. How did you get started in the advice book business? Was there an epiphany, an aha moment when you thought, “Hey, this stuff I’m doing might help others?”

There kind of was. I remember lying in bed one night running through a potential scenario with my kids, advising them how to handle whatever situation had befallen them, as I tended to do whilst trying to fall asleep, and I thought, these situations may never happen, but I should still write this stuff down.

And then I never did.

Months later, a publishing connection fell into my lap, so I decided to pitch the idea of a humorous parenting book. It was accepted, and I finally made good on the promise to myself to let the thoughts in my head come out and play. 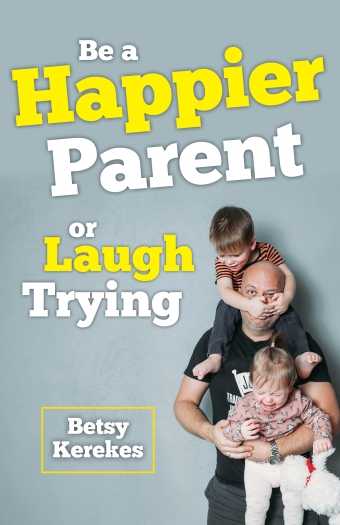 Congratulations on your new book, Be a Happier Parent or Laugh Trying! How would you describe your own parenting style? Has your style changed as you’ve had more children?

I like to think my style is a decent mix of permissive and authoritative, in that I know when to hold ‘em, know when to fold ‘em, and know when to walk away. (But only when the dealing’s done, of course.)

My style has definitely changed. I’ve learned to let go of trying to be a perfect parent with a perfect home. I’ve become happier, accepting that I can’t achieve perfection. And that’s okay. I think my kids are probably happier as a result, too, since I’m less stressed and more able to focus on having fun with them. Fortunately, my older kids have been trained to clean up after themselves thanks to my earlier frantic years, so I guess it all worked out in the end.

What is the most awesome parenting moment that you have ever witnessed in public?

The first thing that comes to mind is something I witnessed while in the process of writing this book. Hence, it made its way into the book. I was at a playground and a mom of a boy and a younger girl were at the monkey bars. The boy made it across with ease, but the girl was crying because she couldn’t do it. The mom assured her daughter that her brother had had more practice. She told the girl, “Practice makes progress.” I respected that she didn’t use the usual trope of practice makes perfect, because in reality, no one can be perfect at everything. We can however, get much better with repeated effort. I found that to be a great lesson worth imparting to all children.

And what’s the worst? Because I gotta know.

Likewise at a playground, many years ago when my girls were young, the only other family there was a mom and her two sons. She wanted to leave. She told her boys it was time to leave. They kept playing. A few minutes later, she said, “Let’s go,” and they completely ignored her. I saw her throw nervous glances in my direction, and I knew she was afraid to discipline her boys in front of me. Though we’d barely gotten there, I was tempted to leave just to give her a chance to do what she needed to do, but I knew that would be unfair to my kids. We did eventually leave before her. She had long since given up trying to get her sons to come with her. I felt sorry for her. It’s too bad parents are afraid to lay down the law in front of strangers. No doubt her kids intrinsically knew that and were taking advantage. Ideally, she would’ve had them trained by then to know that when she says it’s time to go, it’s time to go—I say from my high horse. I’ve probably been in that same position at some point and have repressed the memory.

Most couples have a good cop and a bad cop. Who would your kids say is the more lenient disciplinarian?

I remember times, years ago, when he would look me in the eye to hold my gaze so I wouldn’t look past him into the messy playroom and say to me as he shut the door, “Just don’t look in there.” 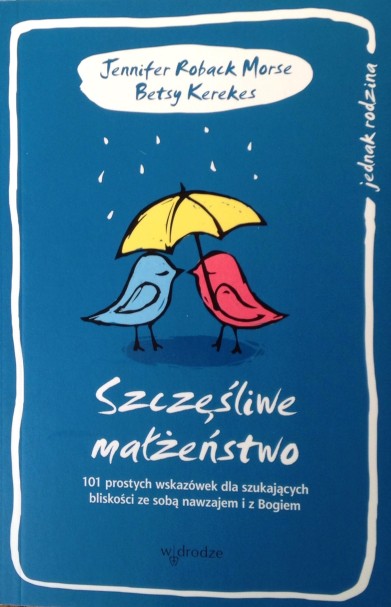 Well, thanks for stopping by, Betsy! Before you go, let me just ask you a quick question. I see that you have written a book in Polish! What’s it about?

Oh, how cool it would be if I’d really written a book in Polish. What you’re seeing is actually the Polish translation of my first book, 101 Tips for a Happier Marriage.

There’s also a Korean and Indian version. The Indian version is in English but reprinted by a in a way that makes it more affordable for locals, which I respect. It’s an honor that the book was found worthy of sharing in other countries.

That’s great, but I was hoping to get a Polish lesson.

By the way, these waffles are so good. I’m getting full. Could I have just one more?

Only if you ask me in Polish. So, no.