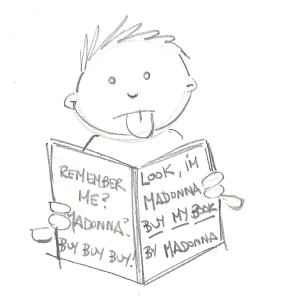 Wha…? Why are you against celebrity kid stories?

Because many of these books share a common trait: They are crummy.

All celebrity books can’t be that bad!

Nope. There are exceptions; Jamie Lee Curtis, for one, keeps me from speaking in absolutes. In most other cases, however, the books are unoriginal, didactic, awkwardly-rhymed nonsense.

Unfortunately, unoriginal, didactic, awkwardly-rhymed nonsense sells very, very well once you put a celebrity’s name on the cover. A lot of book buyers see this name and think, “Ooh! I like this person!” And in the basket it goes.

Well, why should you care?

I care for a few reasons. The buying reflex I described above creates a couple of problems, I think. First, it exposes kids to lousy, unimaginative writing. That, in my view, should be a crime—or at least a misdemeanor.

Thanks in part to the subpar stylings of Madonna and Company, everyone now thinks they can write a picture book. Publishing houses are overwhelmed like never before and have responded to the tidal wave of “meh” manuscripts by changing their submission guidelines. Over the last several years, I’ve seen many houses stop accepting unsolicited work. The market is constricting. Writers are finding fewer and fewer opportunities to get their work noticed.

Do I smell sour grapes?

Far from it. I am a very happy and lucky fellow. I have sold nine books and am very grateful. But there are a lot of writers out there who write better than I, who, for whatever reason, can’t quite reach the brass ring. The glut of celebrity books—and the awful manuscripts those books spawn—are making things more difficult for people who have dedicated their lives to the craft of writing.

This little movement is just a way to say, “Hey, let’s make this publishing thing a meritocracy. Let’s promote the good stuff written by unknowns. Let the kids out there see what a really good story looks like.”

And don’t worry about Madonna. She’ll get by somehow. I’m told she can sing a little.

Your argument is getting persuasive.  If I become a member of H.A.C.K.S. what do I have to do?

Not much of anything, really. The organization has three general guidelines:

I don’t believe in banning books.

Neither do I! A boycott is a voluntary action. A ban infringes on the rights of others.

While you may attempt to gently persuade others from buying celebrity children’s books, please don’t be obnoxious about it. We live in a free society and people should be able to buy whatever books they want – even if those books are lousy.

No! You just have to be a reader!

Just Hit “like” to join the cause! (feel free to leave a comment, too.) Easy peasy! And welcome aboard!